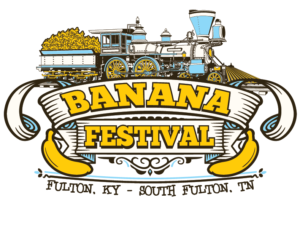 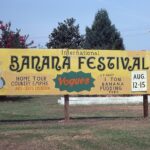 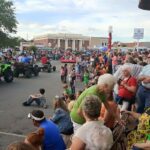 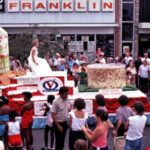 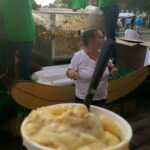 Why Bananas in Kentucky and Tennessee?

Upon hearing that the twin cities are hosting a Banana Festival many reply with, "Why Bananas?" While it is true our weather is not conducive to growing bananas, the twin cities have had a great impact on bananas in the United States.

In about 1880 the Illinois Central Gulf Railroad was the first to develop refrigerated cars. Suddenly those not living in tropical regions could have the same fruits year round that others enjoyed. Fulton, at the time, was home to a large railroad facility and became the redistribution point for the railroad because of its central location between New Orleans and Canada. The United Fruit Co, now Chiquita, began shipping bananas from South America by ship to New Orleans. The bananas were loaded onto railcars on top of 162 pound blocks of ice for the trip north. Fulton had the only ice house on the route north to Chicago. The bananas were re-iced with blocks from the Fulton Ice Plant, now closed. Empty railcars were pulled up to the side of the ice house and these large blocks of ice were loaded end up covering the entire box car. The bananas were then laid on top of the ice to continue their journey. At one point, over 70% of the bananas that were consumed in the US passed through Fulton. Fulton became known as "The Banana Capital of the World."

So now that the concept of Bananas in Fulton, Kentucky makes sense why all the fuss? Well we owe that in part to Carolyn Allen Dunavant. When Carolyn was an 8th grade student at Carr Elementary School, she wrote a letter to Chet Huntly, a news anchor for NBC, inviting him to the International Banana Festival. Chet took her up on her offer and sent national news cameras to cover the small town festival. Carolyn was honored as a Top Banana that year and invited to a luncheon with Miss America, Donna Exum.

The International Banana Festival has had many changes over the years. In the early years "Amigos", who ranged in age from 16-20, from South America would come about two weeks before the festival to stay with local families. They would attend parties, churches, schools, and socialize with local teenagers. This provided both groups with a wonderful experience that no textbook could match.

The highlight of the festival has always been the 1-ton Banana Pudding, deemed the world largest. After traveling in the parade the pudding is then distributed to hungry festival attendees. We hope you join us as we are "Pudding Back Tradition" to the Banana Festival. We are bringing back several events and adding new ones. We hope you find something for the whole family and help make the festival the highlight of the year in the twin cities!